Now for Some Heavy Lifting

Every tablet is a little workstation just as every smartphone is a pocket computer, with dual core and quad core processors becoming more common. These little packages pack plenty of punch, all  accessible at your finger tips. So with the right apps, one can accomplish heavy computing tasks that were once reserved for complex software packages that only run on ‘fat’ clients, desktop and laptops. So here is a look at some of those more specialist tasks:

With the right apps, one can accomplish heavy computing tasks that were once reserved for complex software packages that only run on ‘fat’ clients, desktop and laptops.

Photo Editing: iPhoto for iOS, released at the same time as the new iPad (3rd generation) does what the desktop equivalent is capable of doing, manage photos, find the best shot, enhance and retouch photos and finally, create and share photo collection in the form of photo journals. Settings such as colour, exposure and contrast as well as pre-configured effects can be added straight on the iPad. When ready, the app allow for easy sharing to Facebook, Flickr and Twitter as well as between iOS devices or with AppleTV over AirPlay.

Music Composing and Mixing: From the iLife bundle comes GarageBand, a power music editing and mixing program on the desktop. The iOS version now goes one step further, allowing multiple iOS devices to link up wirelessly, each playing different instruments and recording live music together. The Jam Session feature as it is known on GarageBand takes  garage band jamming among friends (up to three) to a whole new level. Again, with sharing being such a big thing these days, the created masterpiece can be pushed straight up to SoundCloud or YouTube.

Capturing and Editing Video: Another iLife bundled application, iMovie for iOS, is just as easy to use as the desktop equivalent. Capturing video has never been easier on the iPad. Since the second generation iPad, front and rear cameras has become standard and allow for capturing of 720 and 1080p HD videos, on iPad 2 and the new third generation iPad respectively.

The iMovie app allows users to start working on the videos without having to download this onto their desktop or laptop computer. Video clips can be edited and stitched together to create a trailer. Just like its desktop equivalent, users can choose from a variety of templates, customisable graphics and soundtracks to add to the video. Once ready, the edited video can be shared on YouTube, Vimeo or Facebook. For Apple TV users, these can also be streamed using AirPlay for sharing on the big screen. 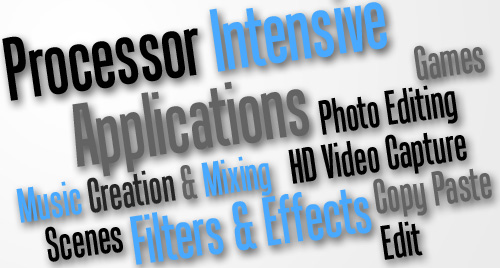