Our favourite Virtual Learning Environment (VLE), the free and open source learning platform has just received an update (12 May 2014). The latest release, Moodle 2.7 is also a long-term support (LTS) release, a much welcomed news from Moodle HQ.

What is Long-term Support & Its Benefits

What this means is adopters of the VLE are given assurance that Moodle 2.7’s stable release will be around for a while, up to 3 years according to Moodle HQ, during which it will continue to be supported and maintained even when other new versions are on the scene. Yes, nothing stands still, Moodle 2.8 is earmarked for release next year. 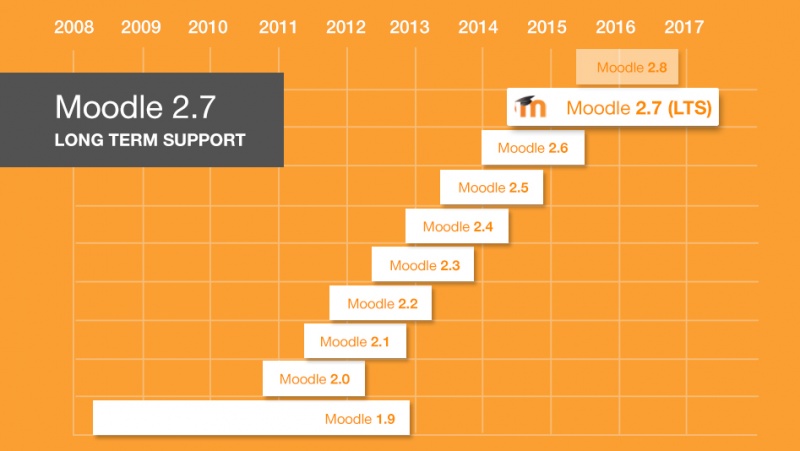 While the push for frequent updates is good, keeping the product development life-cyle fresh, allowing for more features, improvements and stability, it all seems a bit harsh on the users as well as developers. Keeping Moodle 2.7 on long-term support (LTS), a common practice among open source software (e.g. Ubuntu, Joomla, TYPO3, CentOS and KDE) creates a stable platform for which to develop on.

Third party developers, administrators, theme designers, course creators, content designers, teachers and learners will have more freedom and space on which to build and apply their wares. This also means that, if you bought a Moodle guide book  from Amazon, it won’t be out of date as soon as you received it. All in all a great ‘Moove’ by HQ.

So does it mean that we won’t be seeing new features from the Moodle Core. Yes and no, typical of software product lifecycle, the beginning of a Long-term Support period sees a feature freeze. This is to allow developers to make the software more stable and not have to worry about introducing new ones. This period allows for bugs and vulnerabilities to be identified and patched giving users the surety and stability.

Patches, point releases and maintenance releases sometimes introduces new features and new approaches to doing things. Windows 8.1 is a good example… and if we look at Moodle 1.9, it too has had many re-iterations and features. Also, don’t forget, we will begin to see more plugins such as activities, blocks  and themes from willing and ready contributors to make your Moodle 2.7 feel polished and shiny for years to come.

Here is a quick summary of what is new in Moodle 2.7

What is in store?

Wait, there is more…

Improvements in these areas:

For more on New Features of Moodle 2.7, visit Moodle.org

If you are as excited as we are, you would be looking to upgrade your Moodle server to Moodle 2.7 in the next month or so. Make sure you check the Upgrade notes and remember to create your backup.